Recently, Statistics New Zealand has tried to capture volunteering under the wellbeing indicators by analysing previous data from the 2016 General Social Survey. While they acknowledge that this metric is still being developed, their preliminary analysis captures some vital data around informal volunteering, defined as volunteering done outside formal organisations.

Data from the latest Statistics New Zealand Non-Profit Institutions Satellite Account report provides the following snapshot of the organisations/institutions involved in the community and voluntary sector: 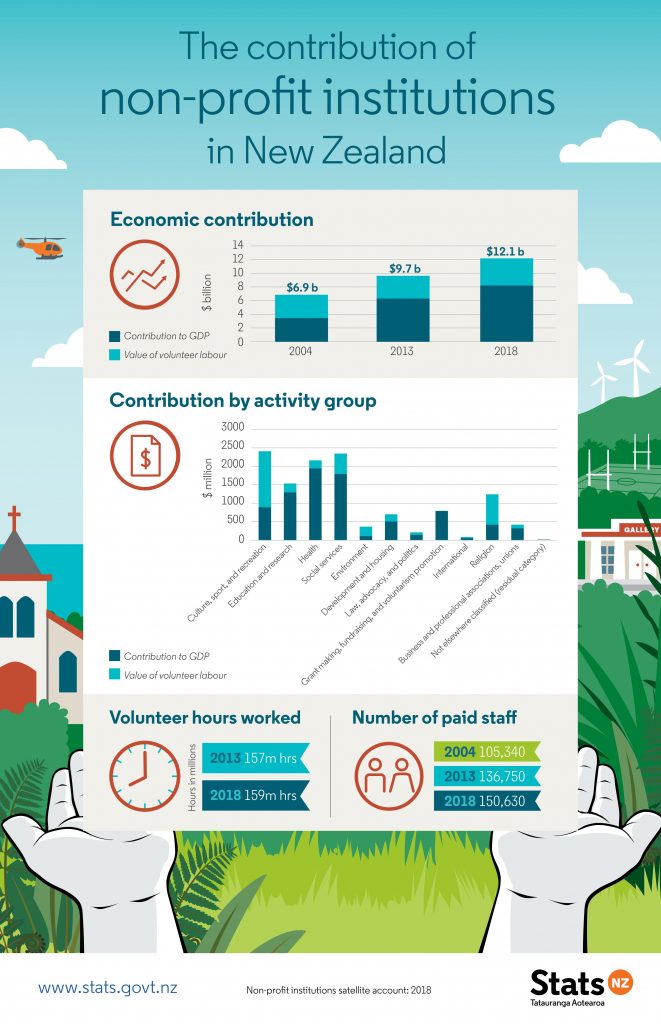 VNZ has carefully selected the following resources to highlight some insights about volunteering in New Zealand and a number of other similar jurisdictions.

The Non-profit institutions satellite account (NPISA) supplements the existing New Zealand System of National Accounts and analyses the contribution of non-profit institutions to the New Zealand economy. It also includes measures of volunteering and unpaid work. A key finding is that value of formal volunteering is estimated at $4 billion per annum.

Volunteering and Donations by New Zealanders in 2016
Statistics New Zealand (2016).

This report from Statistics New Zealand highlights findings about volunteering and donations from the General Social Survey (GSS). It provides useful information for organisations and policymakers on the demographics of the volunteer workforce, plus the number of hours volunteered and for whom. It also explores the types of people who donate and who they donate to.

Labour market statistics provide a picture of the New Zealand labour market, including unemployment and employment rates, demand for labour, and changes in wages and salaries. It includes useful information around volunteering rates, stratified by various categories including age cohort, ethnicity, occupation, and geographical location.

This report summarises the key findings from the report Time Well Spent: A national survey on the volunteer experience, undertaken by the United Kingdom’s National Council for Voluntary Organisations. It provides a valuable perspective on effective research engaging with volunteers.

This is a blog post summarising the make-up of Australia’s volunteering workforce. The rates of volunteering are similar to New Zealand’s, and some of the challenges around inclusion and diversity are also highlighted.

We anticipate keeping this page regularly updated as new resources and datasets become available. Upcoming reports will include the 2020 State of Volunteering Report and an analysis of the latest volunteering data from the New Zealand 2018 Census when it becomes available.